Every culture has its own definition of what makes a metal “precious.” Some countries find metals alluring for their beauty. Others value metals for their functional purpose, as they can be used to make coins, jewelry, art, electronics, and even medicine.

In the United States, however, there are three key attributes that make a metal precious.

Many of the products we use today are manufactured or processed in some way. For a metallic element to be considered “precious,” however, it has to be found in nature, without any artificial aid.

Take gold for example. Research has suggested that asteroids actually brought gold to Earth, just after its core was formed.  Although the “how” it got here is still widely debated, gold is known to be fairly prevalent in the Earth’s mantle, which checks the “naturally occurring” box required for a precious metal.

Shiny and reddish, copper was the first metal to be manipulated by humans. Still today, it’s widely used in electrical equipment, construction (roofing and plumbing) and coinage.   Despite its versatility, copper isn’t a precious metal.   Why didn’t it make the cut? It’s far too common. Nearly 1.52 billion metric tons of copper has been discovered to date, compared to 244,000 metric tons of gold, according to the United States Geological Survey.

A metal is only as valuable as consumers perceive it to be. Precious metals — such as gold, silver, platinum, and palladium — can be used in a number of applications, which is what makes them such a hot commodity.   Gold and silver are widely used in jewelry, currency, bullion, art, and electronics.  Palladium is used in jewelry, vehicle emissions equipment, electronics, and it’s also a critical element in fuel cells. Platinum is also used in jewelry and electronics. Both gold and platinum have separately been used to help treat some types of cancer.   The possibilities for these precious metals are seemingly endless, which is part of what makes them so appealing — and so elite. 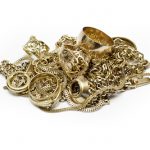 How to Tell It’s Time to Sell Gold 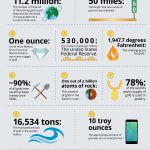