For centuries, diamonds have been known for their incredible hardness. Now, researchers from the Australian National University have devised a way to synthesize diamonds that are up to 58% harder than their natural counterparts.

One of the reasons why diamonds are so hard has to do with their atomic structure, i.e. carbon atoms arranged in a cubic lattice. However, cubic lattices are not the most stable atomic arrangement. To create harder diamonds, the researchers looked to lonsdaleite, another carbon mineral similar to diamond but with the atoms arranged in a hexagonal lattice.

In nature, lonsdaleite forms when meteorites containing graphite strike the earth – making it exceedingly rare. But according to their research, scientists have devised an economical process for creating lonsdaleite diamonds in the laboratory.

The team was able to create this new material by using a type of carbon that doesn’t have a defined atomic structure, known as amorphous carbon (which has been used by other researchers trying to create new, hard materials). Using carefully applied heat and a diamond anvil to recreate the high pressure environments found deep inside earth, researchers were able to shape the amorphous carbon into a nano-scale hexagonal structure.

The researchers are still testing their creation to find out exactly how tough it is compared to existing materials. In the future, they expect to see it used for industrial drilling and mining applications.

How to Tell the Difference between Natural & Synthetic Gems 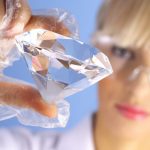 How the World's Largest & Most Valuable Diamonds Form