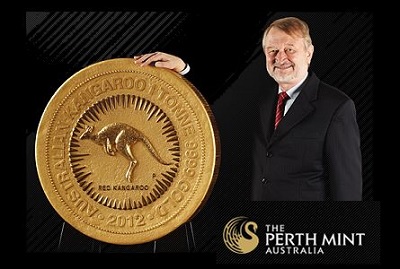 It’s no surprise that the largest gold coin in the world is a product of Australia – which happens to be one of the largest producers of gold in the world. With a diameter of 31 inches and a thickness of 4.7 inches, the “Australian Kangaroo One Tonne Gold Coin” was created by the Perth Mint in 2011. The following year, Guinness World Records officially verified it as the largest gold coin in the world – smashing the previous record held by the Royal Canadian Mint’s 100 kg Canadian Maple Leaf bullion coin.

The Perth Mint decided to create the 1 metric ton coin to commemorate the 25th anniversary of their Kangaroo Gold Bullion Coin series. The mint couldn’t use their usual striking process because of the coin’s incredible size. Instead, they used their existing furnaces to melt down 35,700 oz of 99.99% pure gold sourced from Australian mines, which they poured into a graphite mold of the coin’s intended design. Once the gold cooled, all the details were finished by hand. All in all, the coin was in production for 18 months.

The coin went on tour across Europe and Asia in 2014 before returning home to Australia. Today, it is the centerpiece of the Perth Mint’s “Gold Exhibition” where it is showcased in all its golden glory on a revolving platform. Based on gold content alone the coin is worth nearly $40 million USD, according to today’s gold prices. 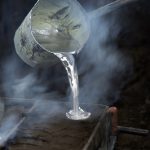 Why Aluminum is no Longer a Precious Metal 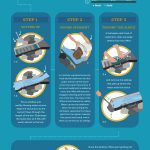