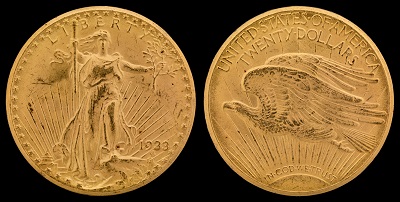 The 1933 minting of the gold Double Eagle coin was a landmark event for the United States, although the people at the time didn’t realize it. The Gold Reserve Act issued by President Franklin D. Roosevelt prevented these newly minted coins from being circulated. But before the batch of 455,500 coins could be melted down, several of them went missing, and one became the center of a decades-long tale of crime, mystery, and intrigue before eventually being auctioned for the record-setting price of $7,590,020. It’s now on display at the Federal Reserve Bank of New York (you can read our three-part series about how the coin wound up there). The 1933 Double Eagle has been surrounded by legal controversy over the years, and it all began with a jeweler and coin dealer named Israel Switt.

Switt, who had connections at the Philadelphia Mint, managed to obtain at least one of the several 1933 Double Eagles that went missing from the mint. However, the coins were illegal to own since they were never circulated, and thus, still property of the United States government. The US Secret Service hunted down all of the Double Eagles with extreme prejudice. However, Switt sold one to King Farouk I of Egypt, putting it out of US jurisdiction. This coin eluded the Secret Service for more than 40 years, but eventually became the famous coin on display at the Federal Reserve Bank in 2002.

By 2005, Israel Switt had long since passed away. His jewelry shop was boarded up and gathering dust. His daughter, Joan Langdon Switt and her grandchildren, were cleaning up the old shop and preparing to close it for good. But, they stumbled upon an old safe deposit box. Inside were 10, 1933 Double Eagles. A find potentially worth more than $70 million.

But unfortunately, trouble followed these 10 coins just as it did for the previous coin. Look forward to more in our next blog post.