Dr. Yasuhiro Iwamura of Mitsubishi Heavy Industries of Japan (who are no strangers to precious metal refining), has developed a process that uses a palladium catalyst to transform radioactive waste into a useful rare earth element.

The process works by using a permeable, nano-structured palladium film to permeate deuterium gas (a form of heavy hydrogen that is commonly used during nuclear fusion reactions). When radioactive cesium is exposed to the reaction, it becomes the rare earth element praseodymium – which has a variety of uses including the production of high-strength metal, and increasing performance of neodymium magnets.

Currently, Iwamura’s method has only shown results with cesium. But, it is expected to work on other elements as well, such as strontium and others. Once again, palladium is making the world a little bit greener. 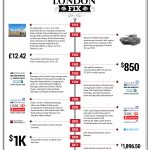 A Brief History of the London Fix