Many of the posts in this blog show how adding gold can improve an object. Whether it’s food or an alloy, gold makes a lot of things better.

But, not everything made with gold is an automatic winner. Take Goloid for an example. This alloy was patented by Dr. William Wheeler Hubbell to try and improve the alloys used for commercial coining in the United States. Goloid is made with the following metals, although the patent states that the proportions can vary:
•    1 part gold (about 3.6%)
•    24 parts silver (about 87.3%)
•    2.5 parts copper (about 9.1%)

The patent also specifies that to create Goloid, the above metals must be separately melted, then mixed with sodium sulfate or potassium sulfate (which acts a reagent during the smelting process). The result is a valuable metal alloy that is strong enough to resist the wear and tear of nationwide circulation.

The United States Mint experimented with Goloid from 1878 to 1880 by stamping “pattern coins,” which are coins that are not circulated, but stamped out to test their design. After testing concluded, Goloid was rejected for use as a coinage metal. Apparently, it was indistinguishable from a 90% silver alloy that was already in circulation. The only way to reliably tell the two alloys apart is a chemical analysis. This would have been a boon for counterfeiters, who could make silver alloy coins and pass them off as the more expensive Goloid alloy.

Although Goloid coins were never officially circulated, the pattern coins that were stamped as part of the test are highly sought after by numismatists. Some examples of Goloid coins range from $2,000-$9,000. At those prices, Goloid coins are definitely worth holding on to.

The Beauty of Ancient Gold Glass 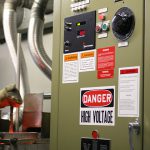