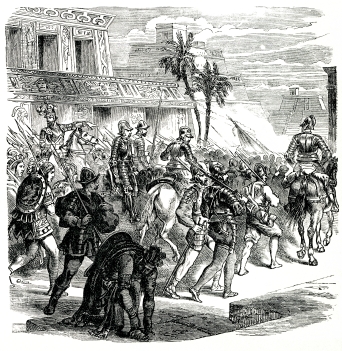 Continuing from where we left off in the La Noche Triste story, Cortés returned to Tenochtitlan to find that the goodwill and patience of the Aztec people beyond regaining. His lieutenant had massacred Aztec nobles and priests, and the Aztecs crowned a new king to drive the Spaniards from the capital. Under siege by Aztec forces, Cortés penned a message pleading for a week-long ceasefire. This would allow the conquistadors to pack up their things, return all the looted gold, and leave the city peacefully.

Of course, Cortés had no such intentions. Rather, he planned to sneak his men out of the city by nightfall with everyone loaded up with as much gold as they could carry. The plan sounded simple enough, but there was one major problem: Tenochtitlan was an island city near the middle of swampy Lake Texcoco, and the Aztecs had been busy either destroying or guarding the bridges and causeways out of the city. Cortés’ gamble depended on two things: a portable bridge his army could use to cross certain areas and the intelligence that the Tlacopan causeway to the west was unguarded.

One night, under the cover of a rainstorm, Cortés made his move. The escape went smoothly at first. But, before the conquistadors could all make it to the causeway, they were spotted. The alarm was raised and the Aztecs had their revenge for the massacre of their people. Ironically, many of the conquistadors did not die at the hands of the Aztecs. They had left the city in full armor, carrying heaps of gold. As you may recall, gold is extremely heavy. In their mad scramble to escape, many (if not most) of the Spaniards drowned in the lake, weighed down by their greed.

It is said that as Cortés saw the carnage around him – his months of gold-rich conquest all crashing down in a single night – tears filled his eyes. Hence, the event came to be known as La Noche Triste. Most of the gold from the skirmish is still at the bottom of Lake Texcoco, although some has been recovered by archaeologists. If any more is found by treasure hunters, they may do well to respect its history as a lesson on the consequences of greed.

The Story Behind Platina 4 Jewelry