In much the same way the Lost Dutchman’s gold mine is one of America’s greatest treasure stories, Lasseter’s Reef is one of the most iconic bits of Australian folklore.

The legendary “reef,” or gold vein, was allegedly discovered by 17 year-old Harold Bell Lasseter. He was riding on horseback from Queensland to the Western Australia gold fields – nearly the equivalent of a cross-continental trip. Along the way, he discovered a rich gold vein near the border of the western and northern territories, possibly on the western side of the MacDonnell Ranges (which would roughly be around the halfway point of his journey). Succumbing to various travel difficulties (a reasonable expectation for a 1,000+ mile trek on horseback), Lasseter was rescued and brought to a nearby surveyor camp. After a short recovery, he and members of the camp were unable to find the reef again.

Lasseter spent several years trying to get people to fund an expedition to find the fabled reef. But, the gold rush at Kalgoorlie in Western Australia was in full swing. No one wanted to venture hundreds of miles out into the Australian desert on the vague say-so of one man when they could just go to Kalgoorlie. However, under the threat of the Great Depression, Lasseter finally got some funding and lead an expedition in 1930.

Naturally, the expedition was fraught with hardship and Lasseter proved to be an unreliable guide. Accused of being a mentally unstable liar, he split off from his group to find the gold on his own. His body was later found within his proposed search perimeter.

No one has ever found Lasseter’s Reef, but the exciting potential of an untapped mother-lode still lives on in Australian folklore. 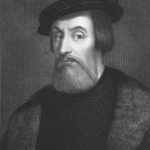