We have heard all sorts of stories from different customers when they thought they were getting an amazing deal from another refinery. They are all examples that prove the importance of being aware during a transaction and finding reputable dealers. Here are some of the best stories we’ve heard.

1. We had a customer come in and say he was getting these unbelievable prices from another scrap buyer. Then after a few transactions, he realized the scrap buyer was undercutting him by dropping some metal on the floor during each transaction.

2. A few people have had their metal melted at incorrect temperatures. Some refineries may intentionally melt your gold at lower temperatures – which causes gold to get caught up in the slag.

We operate 35-kilowatt furnaces that can easily reach high enough temperatures to melt platinum, which is upwards of 3,000°F. That’s so hot you need welding glasses to safely look at the molten metal when it’s in the crucible. It’s not necessary to bring normal karat melts that high, but we do have the capabilities when required.

3. One of the more recent scams, allowed by technology, was that a couple of refining companies were forging assay reports. These reports stated they were from a well-known assayer on 47th street. An original report must have been scanned into their computers for these companies to create their own fake reports. And yes, more than just one refining company was involved in this scam.

4. Not properly sorting out the karats when hand testing metals is another issue that has been brought up. For example, people often accidentally throw 18k with their 14k not realizing the error. Mistakes like this will not always be made aware to customers by every scrap buying company. If they happen to find some higher karat scrap in a mix, they will melt it without increasing the customer’s payout.

We had an instance a couple of years ago when we pleasantly shocked a customer who mixed in 10 ozt. of platinum (nearly $10,000) into a large silver lot. He was grateful and surprised we brought this to his attention.

5. When you go to sell your metal and your gold buyer says something is fake, you should take it back with you. They might coincidentally ask to throw it out, but what if it is, in fact, real? It sounds crazy, but if the above stories are any indication, you can’t be too careful.

Why we don’t Accept Mined Materials from Africa 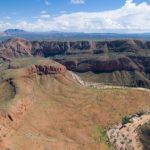