What once started as science fiction and lofty aspirations has evolved into a real possibility: mining asteroids for valuable resources and minerals. Two companies, Planetary Resources and Deep Space Industries, have been cultivating investors and buzz throughout the year with their plans to locate resource-rich asteroids and mine them for profit.

Precious metals on earth are a finite resource, but the vastness of space offers a completely different environment. Asteroids are the reason the earth has precious metals in the first place, so the benefits of being able to mine them would be tremendous. Planetary Resources claims that just one platinum-rich, 30-meter long asteroid would be worth at least $25 billion – and the nearby solar system has (potentially) millions of them.

Technological advances and reduced costs have lowered the barrier-of-entry for the private sector to start space exploration. Deep Space Industries already plans to launch a small fleet of spacecraft to scout out potential asteroids in 2015, with harvesting to follow within the next decade. However, sending materials back to earth is not in the cards for the near future. Rather, both companies are looking to supply the “in-space markets” with cheap fuel, raw materials, and energy.

Water, hydrogen, and oxygen can be converted in space into propellant to fuel the 300+ communications satellites that currently orbit the earth. Nickel, iron, titanium, and precious metals can be used to build components in space – which would be much cheaper than launching them from the earth. 3D printers could create solar power collectors to beam energy straight back to the earth.

Even though the future is fast approaching, it’s unlikely that asteroid mining will make a significant impact on precious metal markets any time soon. It will be a long time before the concept is proven by finding and harvesting a precious metal-rich asteroid – and even longer before materials are regularly transported back to earth. However, asteroid mining is a fast growing field that we may see develop within our lifetime, so it’s worth keeping an eye on.

Where does all the gold that we purchase end up? 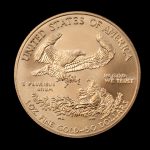