Depletion Gilding: The Opposite of Electroplating

In gold refining, electroplating has become the technique of choice for gilding, or giving objects an outer layer of pure gold. Basically, an electrical current is used to dissolve gold ions and deposit them onto another surface. It’s a scientifically advanced technique that was not invented until the early 19th century. However, there are thousands of gilded artifacts that predate electroplating. How were they made?

One of gold’s most noteworthy properties is that it is extremely resistant to oxidation. The impurities it is alloyed with are not. By submerging a gold alloy in nitric acid (or another suitable chemical salt), the surface impurities will be depleted leaving a layer of pure gold. With the impurities gone, the gold is pocked with millions of microscopic cavities, which gives it a dull or matte appearance. Its luster can be restored by burnishing or polishing.

Although depletion gilding is an easy refining technique to master, it isn’t practical in industrial applications, so it’s no longer as widely practiced as it used to be. However, good examples of depletion gilding can still be found here and there among individual artisans and goldsmiths. 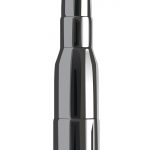 Silver vs. Lead – Which Metal Makes a Better Bullet? Part 1