How to Turn Concrete into Metal

Metal refining has been around since ancient times, but it’s a science that has yet to be perfected. One could call it a cousin of chemistry – the study of matter. There is a lot we still don’t understand about matter, so both sciences have room for improvement. Case in point: scientists have discovered a way to give concrete metal-like properties.

The process has been likened to alchemy – the old science of transmuting lead into gold. However, the technology used to alter the concrete is far beyond anything an alchemist ever used. Concrete powder is placed in a glass container and heated to 2000 °C by a carbon dioxide laser while being levitated by a stream of inert gas. This levitation keeps the molten concrete from coming into contact with the glass and forming a crystal bond with it. As the concrete cools in the presence of other introduced gases, it’ atomic structure rearranges.

The resulting glass-like material is structured in such a way that free electrons are trapped inside lattices of calcium oxide (the main component of ordinary concrete). With the atomic architecture, the concrete can now conduct electricity just like metal.

Of course, there are limitations. The “metallic” concrete doesn’t conduct electricity nearly as well as gold or silver, so it’s unlikely to replace precious metals in future electronics. But, it still has a lot of potential for other applications. 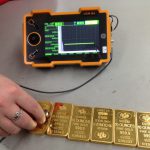 The World’s Most Expensive Gold Items