The idea of a gold heist sounds antiquated by today’s standards – like something that involves cowboys and runaway trains. But in October this year, a major gold heist went down in California.

Surprisingly, there was nothing hi-tech about the robbery. Two masked men walked into the California Mining and Minerals Museum during the middle of the day and began stealing the displays. They used pickaxes to threaten the only two museum staff members on duty. In all, the bandits made off with more than $2 million in gold and gems.

They might have gotten even more if they hadn’t turned their greedy eyes on the museum’s most prized possession. The Fricot Nugget was the largest gold nugget found during the California Gold Rush. It has a beautiful crystalline structure that makes it intricate and pointy (and hard to carry) as opposed to the more common lumpy shape of other gold nuggets. The unwieldy Fricot Nugget weighs 14 pounds (201 troy ounces), but the thieves tried to steal it anyway. Tampering with the display case set off an alarm and forced them to cut the heist short and make a run for it.

While they are still on the loose, they shouldn’t be too hard to catch. There’s a reason no one tries gold heists anymore: selling the gold without getting caught is very difficult! The average person doesn’t have $2 million in raw, unrefined gold and gems. Plus, museum displays are well documented. The instant one of those gems or nuggets hits the market – it’s going to raise a lot of suspicion. 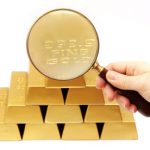