Gold in the news – The Krugerrand

Gold often makes the news because of its extreme value fluctuations, or because another fly by night dealer is trying to buy “broken gold” from people.  Recently, gold is in the news because an unnamed person is buying up a large amount of gold coins.  The buyer, believed to be Swiss, is buying many Krugerrand gold bullion coins. 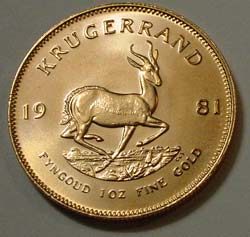 The Krugerrand gold coin is a South African coin first minted in 1967.  It was originally produced by the South African Mint Company to promote South African gold. It was also intended to be minted as currency so it is made out of an alloy that is much more durable.  It is 91.67% pure which puts it into the 22 karat category. The remaining 8.33% of the coin’s weight (2.826 g) is copper.  People very often confuse this coin to be pure because it says 1 oz fine gold on the coin.  Yes , it does contain a full ounce, however when you weigh it, you will realize it is 22k because it weighs 21.7 dwts.

By 1980, the Krugerrand accounted for 90% of the gold coin market.  Because of its success, many other countries decided to mint gold coins.  You might recognize the Canadian Gold Maple Leaf Coin, the Australian Nugget and the American Gold Eagle coins.

Krugerrands are often purchased for investment purposes, as it is mostly pure and they are becoming less desirable compared to say American Eagles.  Currently a 1 oz Krugerrand can be purchased for about $1300.  In some cases, they can be bought at a discounted price if purchased in bulk.

Gold ATM’s coming To the US